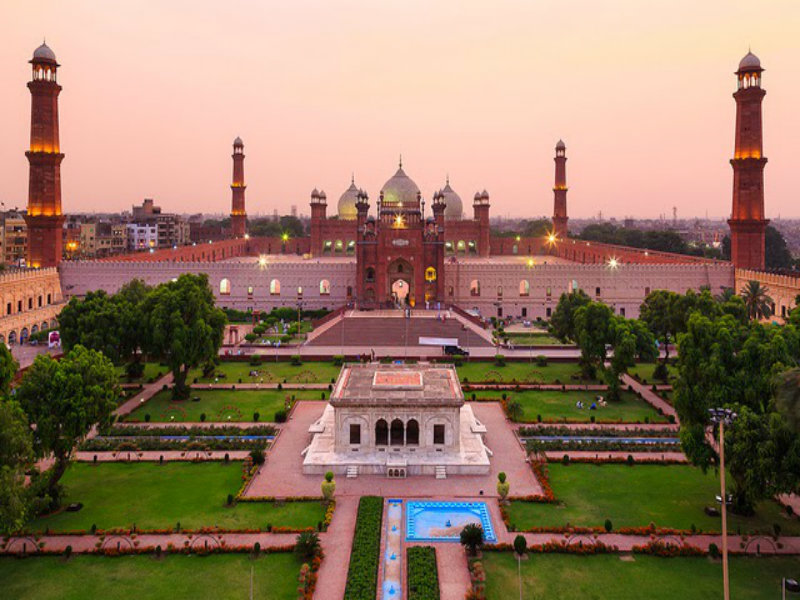 Badshi Mosque, fifth Largest Mosque in the world built during Empror Aurangzaib’s period in 1673. The Emperiacal of Badshi Mosque offer a fine blend of White marble and red standstones.

The Badshahi Mosque  بادشاہی مسجد‎,  in Lahore was commissioned by the sixth Mughal Emperor Aurangzeb. Constructed between 1671 and 1673, it was the largest mosque in the world upon construction. It is the second largest mosque in Pakistan and the fifth largest mosque in the world. It is Lahore’s most iconic and famous landmark and a major tourist attraction. Aurangzeb’s mosque’s architectural plan is similar to that of his father, Shah Jehan, the Jama Masjid in Delhi; though it is much larger. It also functions as an idgah. The courtyard which spreads over 276,000 square feet can accommodate one hundred thousand worshippers; ten thousand can be accommodated inside the mosque. The minarets are 196 feet (60 m) tall. The Mosque is one of the most famous Mughal structures, but suffered greatly under the reign of Maharaja Ranjit Singh. In 1993, the Government of Pakistan included the Badshahi Mosque in the tentative list for UNESCO World Heritage Site.

The mosque is located in the Walled City of Lahore, Pakistan, just opposite to the Alamgiri Gate of the Lahore Fort. The Hazuri Bagh separates the mosque and the fort. On the Eastern side of the garden is one of the thirteen gates of Lahore, The Roshnai Gate. TheTomb of Muhammad Iqbal lies beside the mosque.

Outside the Badshahi Mosque, near its steps lies the tomb of the poet-philosopher Dr Sir Allama Muhammad lqbal famously known as Mazar-e-Iqbal. The mausoleum is a mixture of Afghan and Moorish styles of architecture and is constructed entirely of red sandstone, which was brought from Rajasthan. The tomb near the entrance of the mosque was constructed as a mark of respect and pay homage to this great man who gave the very concept of a separate Muslim state for the Muslims of the British India